A gas detector is a device that is used for the detection of presence of gases in the air, generally in a confined space or a confined area. These devices are often used as an integral part of safety methods. Some gases are benign while some are useful for humans. But there are gases that may be harmful for humans. Gas detectors help in the detection of these harmful gases.

Vacker KSA offers you various types of gases detectors for the detection of various gases that are found in the environment in cities like Dammam, Riyadh, Al Khobar, Jeddah, etc. The gas detector is used to detect gases that are flammable, toxic and explosive. It is useful in various sectors like industries, oil rigs and different new technologies. These detectors are mainly used in firefighting.

Detection of perilous leaks of gas by the help of sensors is known as the process of gas leak detection. Painting, fuel filling, construction, mines of contaminated soils, entering restricted areas are the places that experience toxic gases. These gas detector sensors are used which comes with an alarm that alerts the user when a sign of danger is detected. Gas detectors are getting advanced by the use of new technology and upgrading many features. Industrial plants, refineries, paper pulp mills, aircraft and ship-building facilities are the main places that employ gas detector for the detection of gas leakage.

Harmful gases have an adverse effect on human health. Various electronic sensors are updated and made the gas detector more advanced. The advancement of gas detector has led to many facilities like detect, monitor and alert the user about the leakage about the wide range of gases. The gas detector has a wide variety of in-built systems and used in various places. Carbon dioxide gas detectors are used in houses as to determine the use of ventilation. Passengers’ safety can also be ensured by the use of gas detectors that determine the level of oxygen present in the air. In old days, the detectors were used to detect a single gas at a time but the modern detectors have monitors and alarms that alert the user about the dangerous leakage in the air.

There are different types of gas detectors that are made according to the need and want of the customer. Some of them are discussed below:

There are many types of gas detector and Vacker KSA is the brand that is to be trusted for all the varieties of gas detectors. We are a trusted name and a leading supplier to the major cities of KSA like Dammam, Riyadh, Al Khobar, Jeddah, etc.

Hydrogen Sulphide Gas Detectors :- Vacker KSA offers a wide range of gas detectors for its valuable customers all over the Kingdom of Saudi Arabia. We ...

Oxygen Gas Detectors :- Oxygen gas in one of the most important of all gases found in the atmosphere and is also a highly reactive non-metal. It is col...

Chlorine Gas Detectors (Cl2 Detectors) :- The atmosphere that surrounds us is made up of a huge number of gasses. One of them is chlorine gas which is ...

Refrigerant Gas Detectors :- Refrigerants are substances, generally fluid, that are used in the refrigeration system. This refers to chemicals used as ... 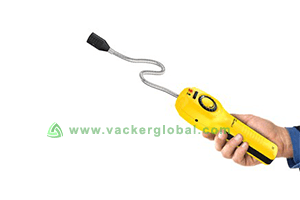 Ammonia (NH3) Gas Detectors :- As it is clear from its name, Ammonia Gas Detectors are devices that used for detecting the level of ammonia present in ...